You might be surprised to discover that behind the scenes of two microbead-filled bean bag chairs, there’s a raging battle being waged. But, that’s exactly what’s happening. The Yogibo and the Moon Pod are fighting for supremacy and the title of the first zero-gravity, body-hugging bean bag chair. In terms of timeline, there’s no question that the Yogibo was invented before the Moon Pod. The cause of the squirmish is much more nuanced than that.

Is the Moon Pod Different From the Yogibo? 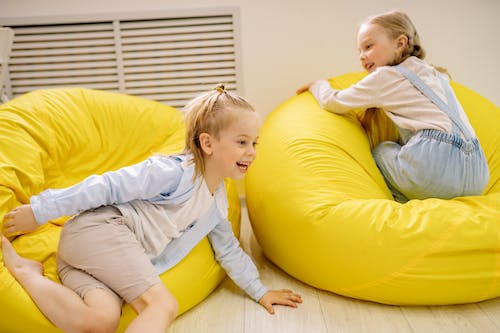 Both the Yogibo and the Moon Pod are filled with polystyrene microbeads and both products provide a similar type of support for the body when it sinks into the chair. The shape of each product is unique, with the Yogibo significantly longer than the Moon Pod.

The Yogibo resembles a long, rectangular pillow, while the Moon Pod sort of looks like a bean. Both products can be squished, squeezed, and squashed into various positions to create a chair, bed, or lounger. When the weight is lifted from the Yogibo or Moon Pod, they will return to their original shape.

As you can see, there aren’t very many design differences between the Yogibo and the Moon Pod, at least on the surface. But, if you just look at when each product’s concept was conceived, there’s really no contest on which bean bag chair came first.

The idea for the Yogibo came from Eyal Levy in 2008 and the Moon Pod didn’t come along until 2017. With nine years between the debut of each product, Yogibo was unquestionably first.

Levy’s inspiration for his Yogibo came from a desire to help his pregnant wife find a comfortable way to sleep on her stomach.

Fiorentino says he was struck with the idea for the Moon Pod when he observed sensory furniture that was being used for autistic children. But, because the Yogibo has long had a close relationship with the autistic community, Fiorentino can’t say for sure that he wasn’t actually inspired by the Yogibo itself.

So, Why Is There a War In the First Place?

The dispute between the Moon Pod and Yogibo came about because nine years after the Yogibo came on the market, Fiorentino was claiming to have invented this type of zero-gravity bean bag chair himself. Levy, of course, took exception to this claim and got his lawyers involved. The Yogibo was not under a patent at the time the Moon Pod debuted, but Levy had applied for a patent and was told it had been approved.

At this time, both Levy and Fiorentino are playing the waiting game. Levy’s attorneys have sent a cease and desist letter to Moon Pod, but it has gone ignored. Fiorentino says he never claimed to have invented the bean bag chair, but direct quotes from his marketing materials tell another story. In any case, this battle certainly appears to be headed for the courtroom.